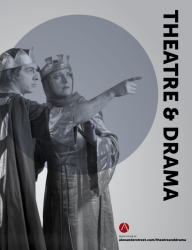 Theatre from Alexander Street features performances of works by American, European, Asian, and other worldwide dramatists from the past several centuries. In addition to performances, Theatre also features dozens of documentaries and interviews about theatre, discussing the history of theatre, acting methods, pioneering dramatists and actors.  Major reference materials, together with records to plays, people, theatres, productions, and production companies are included.